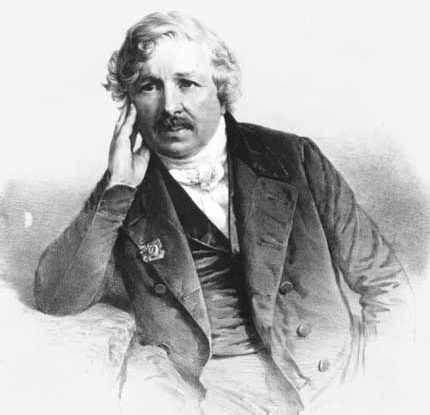 How to start the history of photography? Well for centuries images have been projected onto surfaces. The camera obscura and the camera lucida were used by artists to trace scenes as early as the 16th century. These early cameras did not fix an image in time; they only projected what passed through an opening in the wall of a darkened room onto a surface. In effect, the entire room was turned into a large pinhole camera. Indeed, the phrase camera obscura literally means “darkened room,” and it is after these darkened rooms that all modern cameras have been named.

The first photograph is considered to be an image produced in 1826 by the French inventor Joseph Nicéphore Niépce on a polished pewter plate covered with a petroleum derivative called bitumen of Judea. It was produced with a camera, and required an eight hour exposure in bright sunshine. However this process turned out to be a dead end and Niépce began experimenting with silver compounds based on a Johann Heinrich Schultz discovery in 1724 that a silver and chalk mixture darkens when exposed to light.

The next big step 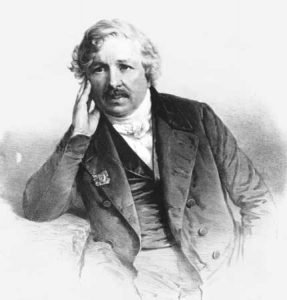 In Paris, Niépce and his associate and artist Louis Daguerre refined the existing silver process in a partnership. In 1833 Niépce died of a stroke, leaving his notes to Daguerre. While he had no scientific background, Daguerre made two pivotal contributions to the process and the history of photography.

He discovered that by exposing the silver first to iodine vapour, before exposure to light, and then to mercury fumes after the photograph was taken, a latent image could be formed and made visible. By then bathing the plate in a salt bath the image could be fixed.

In 1839 Daguerre announced that he had invented a process using silver on a copper plate called the Daguerreotype. A similar process is still used today for Polaroids (the instant film). The French government bought the patent and immediately made it public domain.

Across the English Channel, William Fox Talbot was another pivotal character in a history of photography.  He’d earlier discovered another means to fix a silver process image but had kept it secret. After reading about Daguerre’s invention Talbot refined his process, so that it might be fast enough to take photographs of people as Daguerre had done and by 1840 he had invented the calotype process.

He coated paper sheets with silver chloride to create an intermediate negative image. Unlike a daguerreotype a calotype negative could be used to reproduce positive prints, like most chemical films do today. Talbot patented this process which greatly limited its adoption.

He spent the rest of his life in lawsuits defending the patent until he gave up on photography altogether. But later this process was refined by George Eastman and is today the basic technology used by chemical film cameras. Hippolyte Bayard also developed a method of photography but delayed announcing it, and so was not recognised as its inventor.

In 1851 Frederick Scott Archer invented the collodion process. It was the process used by the author Lewis Carroll.

Janez Puhar invented the technical procedure for making photographs on glass in 1841. The invention was recognised on July 17th 1852 in Paris by the academy Nationale Agricole, Manufacturiere et Commerciale.

The Daguerreotype proved popular in responding to the demand for portraiture emerging from the middle classes during the Industrial Revolution. This demand, that could not be met in volume and in cost by oil painting, may well have been the push for the development of photography.

However daguerreotypes, while beautiful, were fragile and difficult to copy. A single photograph taken in a portrait studio could cost about US$1300 in today’s prices. Photographer’s also encouraged chemists to refine the process of making many copies cheaply, which eventually led them back to Talbot’s process. Ultimately, the modern photographic process came about from a series of refinements and improvements in the first 20 years. 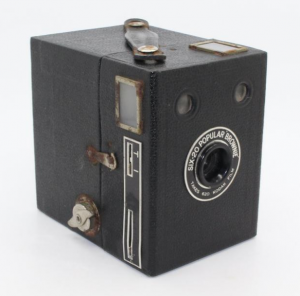 In 1884 George Eastman, of Rochester, New York, developed dry gel on paper, or film, to replace the photographic plate so that a photographer no longer needed to carry boxes of plates and toxic chemicals around. In July of 1888 Eastman’s Kodak camera went on the market with the slogan “You press the button, we do the rest”. Now anyone could take a photograph and leave the complex parts of the process to others. Photography became available for the mass-market in 1901 with the introduction of Kodak Brownie. This was a huge moment in the history of photography.

Since then, colour film has become standard, though in recent years there has been a resurgence in black & white photography. Cameras have moved on drastically now offering automatic focus and automatic exposure.

The norm nowadays in 2021 is the digital camera or DSLR. Digital cameras allow instant previews on LCD screens and the resolution of top of the range models has exceeded high quality 35mm film while lower resolution models have become much more affordable.

For the enthusiast photographer processing black and white film, little has changed since the introduction of the 35mm film Leica camera in 1925. The shooting, developing and printing process is largely unaltered. The red safelight, the trickle of running water in the darkroom and the appearance of your image is still intoxicating. Film photography is usually referred to as ‘analogue’ photography in the modern age as there is nothing digital involved.